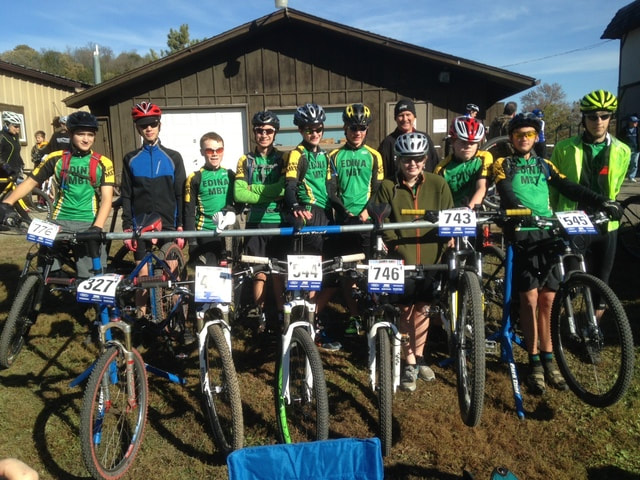 The mission of the Edina / BBB Cycling Team is to build a passion for cycling that will last a lifetime.  The team embraces the National Interscholastic Cycling Association's (NICA) core values of Equality, Inclusivity, Strong Mind, Strong Body, and Strong Character.

The original Edina Cycling Team was founded in the summer of 2013 by Tom Kendall.  Tom coached a local snowboard team and was impressed at how snowboarding attracted young athletes that were not interested in typical high school Winter sports.  When the Minnesota High School Cycling League was founded in 2012 Tom thought the sport might attract similar youth that were not interested in standard high school Fall sports.  He decided to get involved with the league to learn more about the program.  The experience impressed him, and he started the Edina team the following year.

The Minnesota High School Cycling League was founded with the mission of being inclusive, equal, building strong bodies, strong minds and strong charter through cycling. Student-athletes from 6th through 12th grade come from all corners of the state. The majority have never ridden a mountain bike, let alone raced prior to participating in the league.  The league is a youth development program that firmly believes that cycling and an outdoor experience will leave a lasting impression on young minds and bodies.  The Minnesota High School Cycling League is a local league affiliated with the National Interscholastic Cycling Association (NICA).  Founded in 2009, NICA develops interscholastic mountain biking programs for student-athletes across the United States. NICA provides leadership, services and governance for local leagues to produce quality mountain bike events, and supports every student-athlete in the development of strong body, strong mind and strong character through their efforts on the bike.

Tom had three primary goals when he founded the team.  First, he wanted the team to be open to all regardless of ability.  Second, he wanted to have a competitive team within the Minnesota High School Cycling League.  Third, he also wanted the team to give back to both the Edina community and the mountain biking community.
​
“In the beginning, everyone was on a fast learning curve including NICA, MN League and me with the explosive growth. We all were learning as we went along, lots of bumps in the road. But the kids and parents hung in there with me.” – Tom Kendall

The first two seasons were a lot of work for Tom.  Roughly a dozen athletes signed up the first season (see the picture to the right) and 25 athletes signed up for the second season.  Tom was the only coach.  Both the team and the league were new so according to Tom “everyone was pretty much flying by the seat of their pants.”  Luckily Tom gained a team director with John Ellingson in the second season.  John took over the often-thankless job of managing the team so that Tom was able to concentrate on coaching.
​
Tom retired from the head coaching role after the 2014 season.  Kristi Trostel, who was a parent of one of the founding athletes, took up the mantle and lead the team through the 2016 season.  Although Kristi was an avid road cyclist, she had never ridden a mountain bike prior becoming involved with the team.  Leigh Mazion took over from John as team director with the 2015 season. The team expanded to 45 athletes with the 2015 season.  Together the two built a strong structure on the foundation laid by Tom.  They laid out a more formalized practice structure and importantly they recruited additional parental involvement, which was critical given the rapid expansion of the team.

“I was an experienced road biker, but had never ridden off-road.  Needless to say, mountain biking requires a different skill set than road biking.  So, although I never grew to love mountain biking, it seemed to me that what the kids needed was someone to provide them structure and keep them safe.  I really loved watching the kids grow, improve, and gain confidence in their skills.  And of course, getting to be around Lydia (Kristi’s daughter and a former team captain) was always awesome. “ – Kristi Trostel

The Edina Cycling Team was a founded as a club team not directly affiliated with the Edina school system.  Kristi and Leigh applied to the Edina school system for affiliation and this was granted in 2015.  As a result, Junior Varsity and Varsity Edina student athletes now can letter in the sport.  Another exciting development took place with the 2016 season when the team was the Division 1 state champion.  In 2018 the Edina high school team took second in state.

Ryan Horkey joined the team as its assistant head coach at the start of the 2016 season and took over as the head coach with the 2017 season.  Leigh continued as team director.  Both Leigh and Ryan are lifelong avid cyclists and accomplished racers.  It is worth noting that Ryan is not a parent, but became involved with the team because of his desire to promote youth cycling.  Under Leigh and Ryan ’s leadership the team has continued to expand both in terms of athletes and parental involvement.  The size of the team expanded to 85 student athletes in 2019 and close to 30 parents went through NICA certification process for at least one of the three levels of coaching certification.

For the 2020 Season, Pete Seng, a 5-year ECT veteran, will be Head Coach, while Andrew Leddick will coach the Adventure Group, and Katrina Budde will coach the Explorer Group consisting primarily of our middle schoolers.
​
The team’s affiliation with the Edina school system originally meant that only students of the Edina school system can be team members.  Because this limited the ability of the team to serve the greater Edina community, a second composite team named B3 was founded in 2017 to enable students that attend Blake, Breck and Benilde-St. Margaret’s to race in the Minnesota High School Cycling League while practicing with ECT.  The founding B3 team consisted of five student athletes.  The B3 team size has tripled with the 2019 season.
The 2018 Team